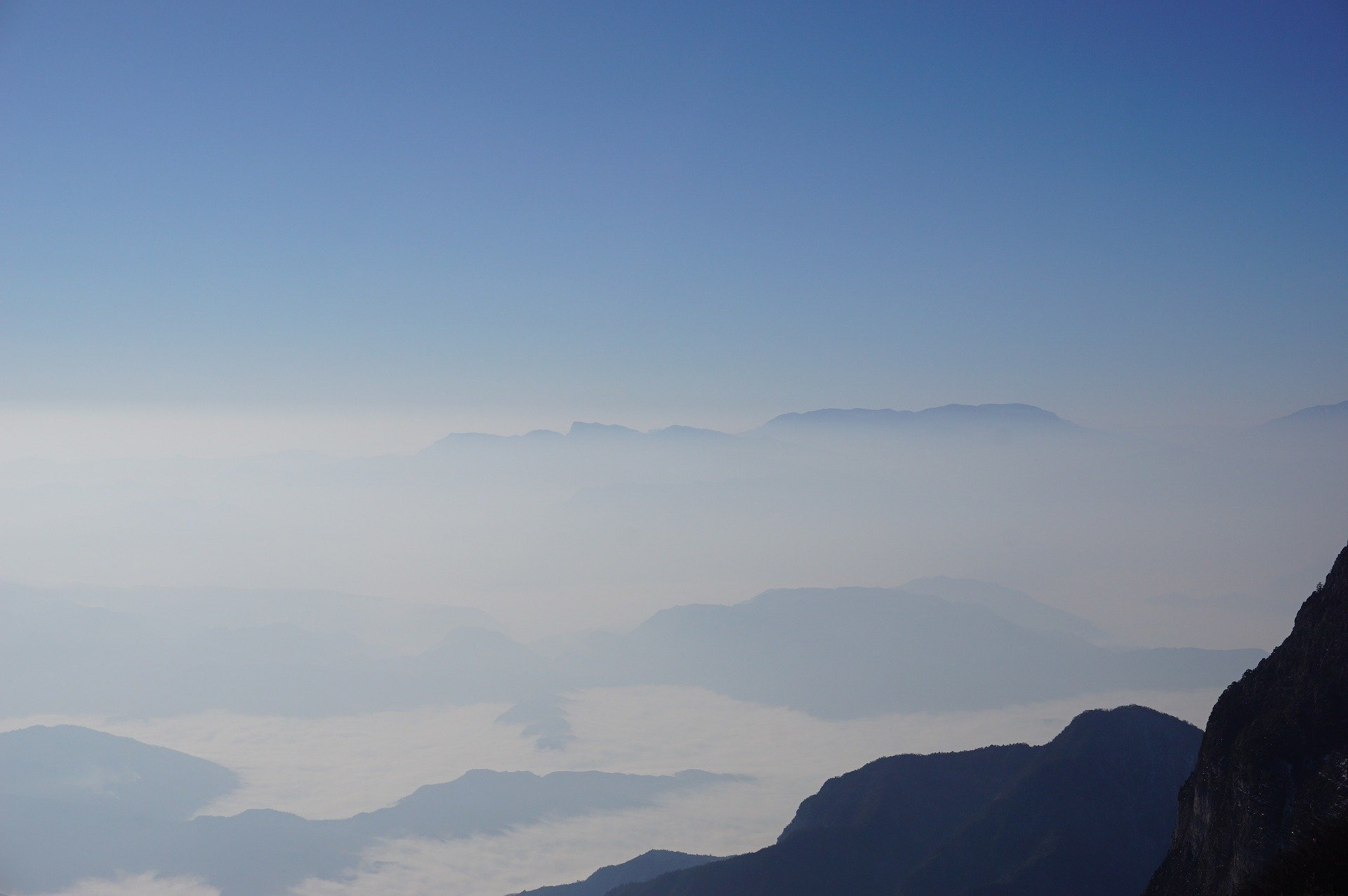 One of the main themes in my writing is how we can draw on traditional wisdom to improve our lives.

In around 2008, I travelled to Emei Mountain (in Mandarin, 峨眉山) in Sichuan Province in China. Emei is one of China’s four sacred Buddhist mountains and is the highest of them all at more than 3,000 metres or 10,000 feet. As you ascend you pass through three levels: first, at the base it’s warm and the paths are undemanding; next, in the middle regions is the ‘sea of green’ made up of cedar, conifer, cypress, as well as more unusual flower-bearing trees – crab-apple, woody lotus, and cassia – growing amid dramatic upthrusts of rock and overhanging ciffs; at the top of the mountain it’s cold and often covered in snow, where travellers ‘look like frozen little ants’, in the words of Song dynasty writer Su Shi.

As a vacation, it was utterly memorable: the mountain not only shockingly beautiful, but the way up is dotted with ancient temples still in use, calligraphy engraved on stones, wildlife including wild dogs and monkeys, and rudimentary shacks selling green tea and simple Chinese food to climbers. But something else came to my attention in connection with the trip: a simple folktale that carries with it a profound message on how to live.

This is the tale:

One day, long ago, a man was walking up the mountain between Elephant Bathing Pool and Nine Ancients Cavern. He was wearing nothing but a worn-out gown, his eyes were dim, and his face was pale with exhaustion. He staggered onwards as far as he was able but eventually could go no farther and fell to the ground through weariness. As it happened, an old woodcutter – bundles of firewood strapped to a pole across his shoulders – was at the same time making his way downhill, and he came across the old man lying collapsed on the ground.

‘Good fellow, why are you lying here asleep on the mountain? If you wish to sleep, why do you not seek shelter and rest in one of the nearby monasteries?’

‘I’ve come from afar in search of immortality,’ replied the man. ‘But I’ve searched the whole mountain and not managed to find a single immortal. I’m now penniless. I collapsed here through hunger and exhaustion.’

The old woodcutter roared with laughter. ‘I’ve been cutting wood on this mountain longer than I can remember,’ he said, ‘and I have journeyed from the thickest forests to the highest peaks. In all these years I have never met an immortal. You had better forget this dream of yours and go home.’

‘I have no money, I’ve not eaten in days, and there is no strength left in these old legs of mine,’ replied the man. ‘How on earth can I get home?’

‘Don’t worry. I’ll take care of you,’ said the old woodcutter. He set to work chopping off a branch of a nearby tree. When he had finished, he passed the branch to the man. ‘Sit astride the branch,’ he said, ‘close your eyes, and you will be carried home.’

The man did as he was told. Lo and behold, within minutes he had been carried down to the base of the mountain just beneath Longevity Bridge. Hold on, thought the man. Isn’t this old woodcutter an immortal? How else could he have managed to get me back down the mountain? Hunger and exhaustion all but forgotten, the man started back up the trail as fast as his aching body would carry him.

When he got there the old woodcutter had disappeared, and in his place was an old man with grey hair and silver beard. The old man had a basket over his shoulder and a small hoe in his hands, and was gathering medicinal herbs.

‘Grandpa, did you see an old woodcutter just now?’ he asked.

‘Which one are you talking about?’ asked the old herb-gatherer. ‘There are several old woodcutters on the mountain.’

‘The one who is an immortal!’

‘Ho, ho!’ laughed the old herbalist. ‘All the old woodcutters on the mountain are immortals! They scale the mountain to earn a living cutting firewood, seeking neither power nor wealth. Don’t you think they deserve to be called immortals?’

‘Where do you live, Grandpa?’ asked the man.

‘I live in the depths of the white clouds.’

‘The depths of the white clouds? Isn’t that where the immortals live?’

‘I dwell with many immortal sages and we are each of the same age.’

‘So you are one of the immortals?’

‘Though like an immortal I am not what I seem, but more than the immortals is the joy that I glean,’ said the old herb-gatherer.

The man was overjoyed to have finally found one of the immortals. He threw himself to the ground before the old man.

‘I now know you to be a true immortal. I’ve travelled many a mile to find you. Please,’ he begged, ‘teach me how to obtain immortality.’

‘I’ll read a verse to you,’ answered the old man. ‘If you understand it, you will become an immortal.’

Seeking immortals the heights you did scale,
But such a quest is doomed to fail.
For while you sought the saints’ domain,
Dearest to them is the world of men.

When he had finished chanting the verse, the old herbalist offered the man a herb from his basket to ease his hunger and sent him off back home. The herbalist then disappeared into the depths of the mountain forest.

As he made his way back down the mountain, the man pondered the words of the old herbalist. Even the immortals love this mortal world! he thought. Then why should I strive so hard to become an immortal? With that thought, he decided to begin the long journey home.

He would never again seek immortality.

In fact, the tale teaches us something very profound: that enlightenment and transcendence are not necessarily to be found ‘up there’ or ‘out there’ but in this very world in which we live. The man in the story searched high and low for the secret of immortality, but could never find it because by thinking of immortality as something outside and beyond himself – some elixir, perhaps, or some magic spell – he was condemned to lose touch with the immediacy of his experience. The woodcutter, on the other hand, sought for nothing unrelated to the task in hand: the complete focus that comes when ‘self’ merges with task and object. It is this focus on the task – and not the outcome of the task – that is one of the routes toward the higher states of experience that raise a man above his limited and mundane self.

In fact, there is a considerable body of research now confirming that task-focus is one of the keys not only to higher states of experience, but also (and more pragmatically) to better practical performance in fields as diverse as painting, climbing, surgery, and sport. This is fundamentally the topic of chapter 4 in Generativity so I won’t elaborate further here, other than to finish up with a quotation from an elite golfer that summarizes the point better than the rest:

There is a little bit of very worthwhile teaching in some of these old tales.