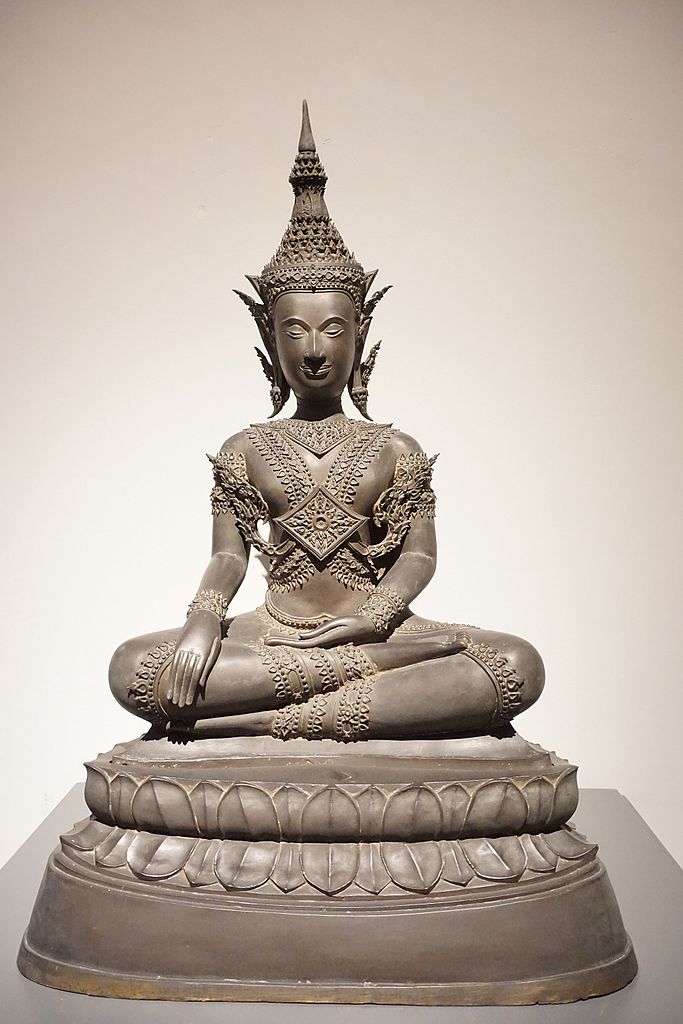 One of the most thought-provoking things to do when you find yourself in a foreign country is to pay a visit to its national museum. Objectively speaking, of course, some national museums will be better than others. But it’s not only the scale or quality of the displays and exhibitions that matters. Of just as much interest is what the museum can tell you about the culture of which it is a part.

Thailand’s National Museum in Bangkok is a case in point, as I found out on a recent visit there. Let me share several observations.

The National Museum is overwhelming in its singularity. It is, of course, no surprise that a Thai museum would have extensive holdings of Buddhist items. What is surprising is the extent to which the holdings comprise Buddhist sculpture and, in particular, sculpture of the historical Buddha, Sakyamuni, in particular. The most common image is that of the Buddha overcoming Maya and calling the earth to witness (signified by his touching the earth with his right hand while in the lotus posture). There are also multiple images of the Buddha teaching (signified by thumbs touching index fingers) and dispelling fear (both hands held up). Admittedly, there are some other items: sculptures of guardian lions and items relating to the Thai monarchy. But these are the exception. You have to go to this museum to understand what I am talking about. The Buddhas are endless and the experience is overwhelming. 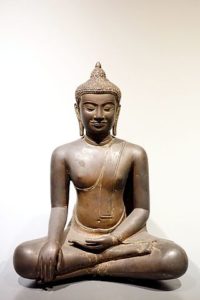 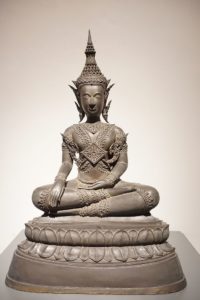 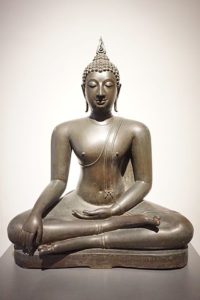 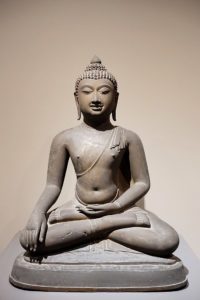 It’s well known that Buddhism developed into two main traditions: the Theravada (found predominantly in Thailand, Cambodia, and Burma) and the Mahayana (found in different forms in China, Japan, Nepal, and Tibet). My experience to date has been predominantly with the latter, no doubt to a large extent because I have spent more time in Northeast rather than Southeast Asia, but the National Museum of Thailand brought home to me, in the short space of two or three hours, that what makes Theravada Buddhism special is its particular focus on the historical Buddha, Sakyamuni, and his teachings. Visit the Shanghai Museum and view its Buddhist collection, for example, and you will find the full panoply of Mahayana Buddhism: the several different Buddhas, the bodhisattvas whose role is to return to assist others to achieve enlightenment, along with other gods, goddesss, and representations of exotic mystical creatures and lands. In the Bangkok National Museum, on the other hand, the singular insistency of Theravada makes itself known in the hundreds if not thousands of iterations of the unique historical source of Buddhist wisdom known by the name of Sakyamuni. 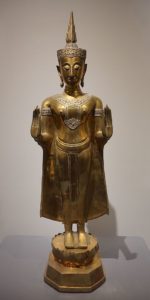 The insistent focus in Theravada Buddhism on the historical Buddha is also a focus on Buddhism as a this-worldly philosophy rather than an other-worldly religion. It is Buddhism that makes itself available in a way that can be practised in the daily affairs of life through a wise application of its fundamental principles of mindfulness and detachment. It’s not for an outsider to these traditions to express a preference for one form or another. For myself, Tibetan Buddhism and Zen have lost none of their interest. But I admit that the National Museum has given me a renewed appreciation for the quiet intensity of Theravada Buddhism.

One final reflection on the National Museum is this. In an age where ‘diversity’ appears so often to be the primary aim, what are we to make of the version of Thai culture that is communicated in the National Museum? There could be nothing less ‘diverse’ than what you encounter there: endless reiterations of the image of the historical Buddha. 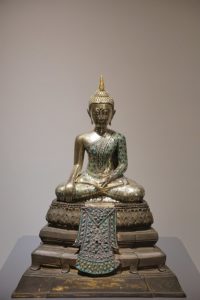 There are, let me suggest, two answers to this.

First, the demand for diversity within a nation is often, paradoxically, the manifestation of a parochial mindset. One could say, from the national perspective, that the National Museum’s approach totally fails to promote diversity. But from an international perspective, it’s quite the opposite: it is precisely because there is a unique and singular Thai culture – inimitable by any other nation – that we have diversity on a global level. A world full of unique national cultures is a more diverse world than a world in which each culture is diversified in the approved manner.

The other answer is the answer that might have been given by the historical Buddha himself. For Sakyamuni would no doubt have accepted and appreciated the fact of diversity in social and cultural life. Truth itself, on the other hand, was and is anything but diverse. Truth is, in fact, both totally general and totally universal: that suffering exists; that suffering arises from attachment to desires; that suffering ceases when attachment to desire ceases; and that freedom from suffering is possible by practising the Buddhist teachings.

That there is a place that insistently and unashamedly shares and promotes this essential thinking is just fine with me.